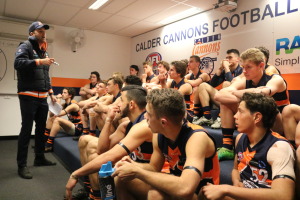 It was a classic RAMS Arena game against the Stingrays, with the breeze having a massive influence on the game. The game rarely stretched further than a three goal difference for either team and both teams took their chances with the wind in what was a low scoring, high possession game.

Our defenders held strong as the Stingrays dominated the inside 50 count, but back to back defensive efforts kept them from capitalising for the most part of the game. The stat sheet reflected this as Brodie Newman and Cavallaro found plenty of the ball on the rebound.

The final score-line an unfair representation of the game, as the visitors had an extremely strong finish to the game, really taking advantage of the breeze and centre clearance dominance.

Mitch Podhajski didn’t miss a beat in another stellar performance for the Cannons, bolstering his draft stocks further with 30+ possession game. Lucas Cavallaro lost no admirers in what was arguably his best performance of the season, marking everything that came in his vicinity.

As an undersized unit, the Cannons managed to out-mark the opposition (+9), a stat that the coaching staff were very impressed with on the day. However, the floodgates opened in the last quarter as the number of opposition inside 50’s become insurmountable finishing the day with +34.