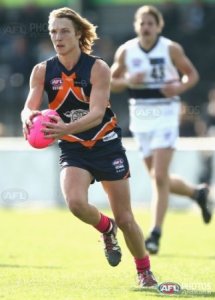 IT will all be on the line for Calder Cannons on Saturday as the club chases a last-gasp entry into TAC Cup finals.

The Cannons will have to beat Western Jets at Rams Arena to remain a chance of hauling in eighth-placed Gippsland Power.

Eighth spot is the only one up for grabs heading into Round 18 after Northern Knights secured their passage to finals with victory against Murray Bushrangers.

Overturning an 80-point Round 4 defeat at the hands of the Rebels, the Cannons claimed their sixth win of 2017.

Captain Brad Bernacki (40) and Jack Bytel (36) combined for more than 76 disposals in the victory, while Noah Balta and Aidan Tilley both booted three goals.

After leading by three points at three-quarter-time, the Cannons kicked away from the midway point of the last term thanks to goals from Ben Caluzzi and Tilley.

Balta had earlier given the visitors a nine-point advantage, but Scott Carlin answered for the home side.

Ismail Moussa iced the win with the last goal of the contest 40 seconds before the final siren sounded.

“I have said to our guys (Western Jets) have probably had it over us the last few years, the last couple of games," he said.

"It’s our second final. We want to make sure that we do everything right as a team, if that means winning the game, great. If we don’t, we have just got to keep learning from it."

Caluzzi was another who impressed with 23 disposals and three goals, while Jake Riccardi continued his strong form after being shifted into defence with 20 possessions and six marks.

Johnston also highlighted the perfomances of Sam Graham up forward and Rhylee West.

"Our blokes, I am very proud of them, they fought it out," he said.

Saturday's match against Western Jets starts at 11am at Rams Arena.