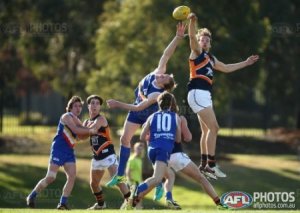 CALDER Cannons remain in the hunt for a TAC Cup finals berth despite a 55-point loss to Eastern Ranges on Saturday at Rams Arena.

The Cannons had only four less scoring shots but fell 19.8 (122) to 9.13 (67) against a Ranges side which has won its past five matches and will enter finals as one of the competition's form teams.

Calder sits ninth on the ladder with two rounds to play, one game and 9.61 per cent behind eighth-placed Gippsland Power.

The remaining two spots will come down to Northern Knights, Gippsland, Calder, Western Jets and the Cannons' next opponent - Greater Western Victoria Rebels.

There were positive signs in the opening half of Saturday's loss to Eastern as captain Brad Bernacki, Jack Bytel, Aidan Tilley and Mitch Podhajski played key roles to keep the Cannons within 19 points at the long break.

A seven-goal third term allowed the Ranges to take control of the contest, leading by 48 points with a quarter to play.

The Cannons fought hard to limit the damage in the last quarter, kicking two goals to three.