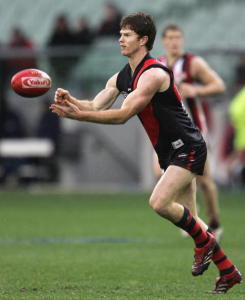 REGARDED as one of the greatest footballers in Victorian state league history, Ben Jolley will this weekend become the eighth player to feature in 250 matches in the VFA/VFL.

The 2004 Calder Cannons premiership captain will play his 198th match for Williamstown against Werribee on Sunday, having also featured in 52 games for Bendigo.

The prolific on-baller was part of one of the Cannons’ golden eras in the TAC Cup, leading the club to a 70-point win on the biggest stage against Eastern Ranges.

“The lessons I learned playing for Calder, through all the junior programs, (under) 15s, 16s and through the under 18s of course, they still stick with me today,” Jolley told Pathway to the Top, Calder Cannons’ radio program.

“As a young footballer, you are always trying to find that, not so much level of professionalism, but that thing that kind of satisfies your want and desire to be successful.

“That’s exactly what I found at Calder from the very first day that I walked in the door. We managed to have some success, but I don’t say that lightly.

“It is just amazing what a group of like-minded young men can achieve when they put their minds to things.”

Jolley, a Strathmore junior, was subsequently drafted as a rookie by Essendon and played four matches for the Bombers in 2006.

His tenacity and tackling was lauded by Essendon’s fans at the end of his debut campaign, but by 2008 Jolley was playing in the VFL with Williamstown.

His achievements since arriving at Burbank Oval would be the envy of most footballers.

Jolley has been named in the VFL team of the year seven times, won four club best-and-fairest awards with the Seagulls, twice represented Victoria and achieved the ultimate success as a premiership captain.

He remains one of the VFL’s premier midfielders at 31 years of age, averaging 27 disposals and six tackles per match this season.

“It means I have, to this point in time, been able to get the absolute most out of my footballing ability,” Jolley said.

“It has also provided me with a whole host of memories along the way, be it good and bad.

“All those things that as they say, when you finish your career, you can reflect on.

“This provides a brief opportunity to think about all the people you have met, all the things you have experienced and just take stock for a few moments.”

Calder wishes to congratulate Ben on reaching 250 VFL matches, the first Cannon to achieve the milestone.