Former Cannon makes a slam dunk in US 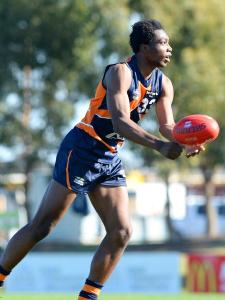 FORMER CANNON MAGBEGOR A SLAM DUNK IN THE STATES

WHEN Calder Cannons’ alumni go on to play high-level sport, it’s usually in either the AFL or the VFL.

But after being signed by the University of West Georgia Wolves ahead of the 2017-18 college basketball season, former Cannon Ovie Magbegor is an exception.

The former Cannon turned footballer is already turning heads in the United States.

“Ovie has an incredible knack for the getting the ball, a skill I hold in high regard,” Wolves head coach Michael Cooney told UWG Athletics.

“Last summer I watched him nab 22 rebounds against a very good Indiana select team. Those kinds of numbers remind me of an undersized forward who competed for us named Rafi Stevens.”

Such a comparison- Stevens is a legendary figure at the university- speaks volumes about the regard in which the 197cm Magbegor is held.

Playing for the Coburg Giants, the 19-year-old averaged 15 points and 12 rebounds per game across the 2016 season, while also earning a silver medal at the Ivor Burge & U20 Championships in 2017.

But the round ball wasn’t Magbegor’s only love- he regularly juggled Cannons’ commitments with basketball - averaging 22 hit-outs a game as the team’s main ruckman in 22 TAC Cup games across 2015 and 2016.

He was to be retained for the 2017 season as a 19-year old, but the lure of an overseas scholarship proved too strong.

"The Calder Cannons would like to congratulate Ovie on earning a US opportunity in his first sporting love - basketball," Cannons talent manager Ian Kyte said.

"While Ovie showed promise in the TAC Cup during his time at Rams Arena, his passion for basketball was obvious and the club is proud of his development in both pursuits."

Ovie isn’t the only Magbegor with a considerable sporting reputation- his sister Ezi is regarded as a budding superstar on the Australian basketball scene, and could well join her older brother in the States on a sporting scholarship in the years to come.