Two Cannons off to combine 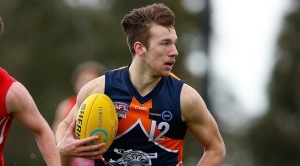 AFTER producing break out TAC Cup seasons for Calder Cannons, Mitch Podhajski and Noah Balta have been invited to the AFL National Draft combine in October.

The two Cannons stars have been in scintillating form in the TAC Cup and recently featured for Vic Metro at the Under-18 National Championships.

Podhajski recently spoke to Calder Cannons’ radio program, Pathway to the Top, detailing his long-held desire to earn an invite to the national combine, where 83 players will press their case for draft selection in front of AFL clubs.

“That was one of the goals when I sat down with (talent manager Ian Kyte) Kyety and (coach Andrew Johnston) Johnno early on in the year.

“(We) worked on and spoke about how that was going to be my ultimate goal before the end of the year for the draft, along with playing some finals footy,  which we are still capable of doing.”

Podhajski said he expected the agility test would be his strong point at the combine, adding he would narrow his focus on how to excel in the other tests in coming months.

“The last two years on the TAC Cup testing day I’ve tested well for my agility test, so I think that’s somewhere where I expect myself to test well at the combine,” he said.

“Both the endurance and 2km time trial, which is new, and (yoyo test which has replaced the beep test and 3km time trial), that will be my main focus area over the next couple of months until the combine.

“And my fitness and try get as good scores as I can in that.”

Podhajski and Balta’s versatility has endeared them to AFL clubs and made them valuable players for Calder as it chases a TAC Cup finals berth.

“I’m happy to play anywhere where there’s an opportunity, but I think at the moment definitely playing backline for the Cannons last year and start of this year is the position I find most natural at the moment,” Podhajski said.

“Growing up as a kid I was always playing as a forward, midfield and back man, so I never really got to settle into a position for a few years, so It’s worked out well for me in the long run.”

The draft combine will be held form October 3-6 at Etihad Stadium.