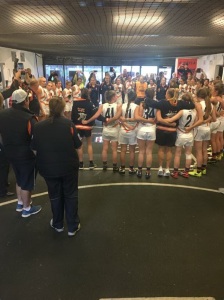 The Cannons were crowned premiers in the inaugural season of the TAC Cup Girls competition after finishing on top of the ladder with a percentage of 412.75 after claiming five consecutive wins.

The history-making flag was sealed on Good Friday when the Cannons defeated Bendigo Pioneers by 63 points, putting them out of reach of the Bushrangers.

“We talk about reward for effort for the girls, but also for the club and the staff who spend so much time out there, probably all in a voluntary capacity.”

Eva, Collingwood’s vice-captain during the first season of AFL Women’s, said several players from Calder’s premiership team would come under the microscope of elite clubs at the next draft.

Lauren Caruso, Monique Conti, Sarah Dargan, Chloe Molloy and Molly Warburton are among a host of prospects the club hopes will gain further attention from AFLW clubs throughout 2017.

“Sarah Dargan, she’s been around the Metro program for a while,” she said.

“She really took her opportunity this season. We put it on her early on in terms of leadership and to bring her own game, her own style, not try to fit any mould.

“She has done herself a world of good in terms of bringing that to the fore. I am sure AFL clubs are having a look at what she is capable of doing now.

“Lauren Caruso is another. I could run through the whole team, but I can’t speak forever. The really pleasing thing for us as coaches, when we selected the squad prior to Christmas there was a few girls who we thought were probably on the fringe.

“Then the really hard job for us last Wednesday night…all girls in our squad could have been capable of playing on Friday.”

One of Calder’s greatest strengths was its depth, highlighted by the players who stepped up in the final round to fill the void left by the absence AFL Academy members Madison Prespakis and Conti.

Eva said the club’s defence, which ranked third in the league, had played a vital role.

“Down back, Alicia Rooth and Caitlyn Brown, they gave us pretty much a brick wall down there in defence,” Eva said.

“We gave licence to Molly Warburton across half back to be that rebounding player. All three of them built really strong foundations for us in the backline.

“We weren’t scored upon heavily in any of our games, that’s a credit to those girls and little Erin Bult down back as well. She’s one of the smaller players but she did a job every week down back.

“She’s another girl that has a bright future because she is just so disciplined in what she does.”

To listen to Eva’s full interviewed, which featured on North West FM’s Pathway to the Top, click here: http://bit.ly/2o6lb8r