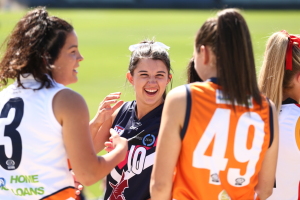 RAMS Arena will be the centrepiece of the inaugural season of the TAC Cup Girls competition, with 11 matches to be played at Calder Cannons’ home ground during the five-round campaign.

The Cannons will feature in four matches at the Craigieburn venue during the historic season, which starts on Saturday when Murray Bushrangers take on Bendigo Pioneers.

The fixture for the 2017 campaign was released by AFL Victoria on Thursday and includes games at Calder’s home ground against Eastern Ranges, Western Jets, Oakleigh Chargers and Bendigo Pioneers.

The Cannons’ first match is on Sunday, March 19 against Gippsland Power at Frankston Oval, with the season running until Friday, April 14.

“It’s a competition our girls are thrilled to be a part of,” Calder talent manager Ian Kyte said.

“We enjoyed success at last year’s AFL Women’s draft when Deanna Berry was chosen by Melbourne and are sure the talent within our girls academies will shine throughout the first TAC Cup Girls season.”

Calder’s girls side will play three double headers with the club’s under-18 boys team, including a match before the Cannons’ TAC Cup opener against Eastern Ranges on Friday, March 24.

Other double headers are scheduled for Saturday, April 1 and Sunday, April 9.

The final round of the competition will be played as a triple-header at Rams Arena.

Each of the 12 TAC Cup regions will be represented in the first girls competition, with the premiership to be awarded to the team on top of the ladder at the end of the campaign.

Games will be decided over four 15-minute quarters.

“With the launch of TAC Cup Girls, we’re really excited to see Victoria’s female talent develop and one day play on the main stage in the NAB AFL W or Swisse VFL Women’s competitions.”