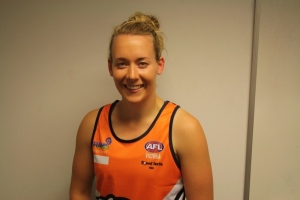 CARLTON are privileged to have such a natural leader in Lauren Arnell at the helm of their women's AFL team in the competition's first season.

That dream became a reality in the inaugural women's match as the former Calder Cannons coach led her side to a convincing 24-point victory over Collingwood on February 3rd.

“For any young person growing up, male or female, that watched AFL players live their dream, it then became a dream for all of us,” Arnell professed.

A capacity crowd of 24,500 packed into Ikon Park, while a lockout was enforced at quarter-time to avoid overcrowding much to the disappointment of the thousands of fans still queuing outside.

“The crowd figure was a big unknown for us,” Arnell admitted.

“I could never have imagined what became of the night, it was just incredible.”

Leading up to February 3rd, a night that marked a historic occasion for women’s sport, the Carlton captain sort advice from individuals around her to contain her emotions, including three-time premiership player Chris Johnson.

“I did use people close to me, people that I trust and people with experience around footy… I leant on them and sort a bit of guidance from people like Chris Johnson, who I coached with at Calder (Cannons).

“Johno was really fantastic leading into the night and definitely gave me a bit of perspective.

“He pointed out a few things I’d like to keep to myself but for the most part it was just around enjoying the opportunity that I had and my team had.”

Throughout primary school, Arnell was often called a ‘tomboy’ due to the fact she was so obsessed about sport – a keen Western Bulldogs fan who would spend every lunchtime kicking the football with the boys.

“I copied the boys in the sense that if you kicked a goal, you’d celebrate or commentate yourself.”

However, playing professional football was a dream Arnell thought could not come to fruition, mainly due to the declining opportunities teenage girls have to play AFL.

Arnell decided to play basketball in her secondary years, and it was not until she moved to Ballarat for university that she realised women actually played competitive football.

“I never played organised footy in a competition, [I] didn’t know I could until I was 18,” Arnell confessed.

“(AFL) was never an opportunity I saw I could do, so basketball was the sport that I stuck with.”

Arnell said she was “too short and too slow” for an Opals basketball career and once she knew she could play competitive football, she believed “nothing could hold her back”.

She spent her first season at North Ballarat in 2005, then went on to win eight VWFL premierships with Darebin Falcons, and represent Victoria on six occasions.

Of course, there is more to Arnell than meets the eye.

Both coaching roles were at Calder Cannons, the football establishment where she met role models, Ian Kyte (Talent Manager) and Chris Johnson (U16 Boys Coach).

“Once you start (coaching), it’s not something you fall out of,” Arnell revealed.

She believes it has added an undoubted advantage to her current playing career.

“Coaching with guys like Chris Johnson and working with Ian Kyte… you learn a lot from those people,” Arnell said.

“I think you see the other side of the fence too and that can only be a benefit to players.”

Fast-forward to now, Arnell is captain of Carlton in the AFLW competition which has thrived in its opening four rounds.

She also expressed the sheer importance of finally having a national women’s AFL league.

“Having both males and females of all ages approach me and talk about how it’s positively impacted their family lives on a social level is just incredible.

“Young girls who wouldn’t choose to play any other sport [are] now wanting to wrestle each other outside the ground because they’ve watched us play footy.

“Knowing that I was one of the only girls who did that with the boys growing up and now there [are] girls who feel like that’s OK and that it’s encouraged [is amazing].”

Arnell believes the introduction of the women’s AFL league will continue to break down gender stereotypes, mainly the perception that AFL is a man’s sport.

“It’s just incredible to think [about] the difference in genders and how we’re taught to be when we’re young… those barriers we had growing up are now not there for kids today.”

The 29-year-old midfielder praised Carlton’s decision to partake in the AFLW and mentioned how avid Shane O’Sullivan, the club’s Football Administration Manager, is, about the women’s game.

“We are one club,” Arnell declared.

“It’s awesome to see ShaneO (O’Sullivan) and people like Andrew McKay as passionate about women’s footy as they are about men’s footy despite how new it all is to most people.”

Carlton are currently fourth on the AFLW Ladder, but Arnell is ensuring her teammates remain grounded.

“[But] at the same time, we are professional athletes and professional footballers now, it’s not just a dream, it’s reality.

“It’s only a short season, there’s no time to get complacent.”