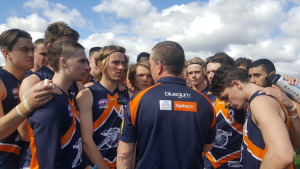 CALDER Cannons’ attention will turn to next month’s AFL Draft State Combine and the national draft after bowing out of TAC Cup finals on Saturday.

Calder kept pace with the reigning premier in the opening term and managed more scoring shots.

But with their radar off target, the Cannons trailed by 13 points after Oakleigh booted 5.0 to 2.5 to quarter-time.

Calder had chances to cut the margin in the second quarter before the Chargers kicked clear, establishing a 56-point halftime lead.

Oakleigh kept the pressure on for the remainder of the contest and recorded a 106-point victory to progress to a semi-final against North Ballarat Rebels this weekend.

Cannons coach Andrew Johnston admitted his side struggled to match Oakleigh’s intensity, but hopes the experience will serve the club’s emerging players well in years to come.

“It’s just about workrate and learning from it,” Johnston said.

“We had four or five 17-year-olds in there and a number who could have played.

“They’ve got to learn from that and be better for it going forward.”

Ben Ronke did his draft chances no harm with another impressive game through the middle of the ground.

Ronke kicked two of Calder’s goals and found plenty of the ball, working tirelessly to stop the Oakleigh onslaught.

“He just continued to work hard and he got plenty of the ball.

“His contested ball and everything like that was really good. He showed the way.”

Johnston said players such as Brad Bernacki, Noah Balta, Lachlan Brown and Ben Caluzzi would be ready to play key roles for the club next year.

Six Cannons have been invited to next month’s state draft combine, with Ronke, Zach Guthrie, Jackson McDonald, Michael Romero, Hayden Blythe and Mitch Lewis to be given the chance to test in front of recruiters and press their draft claims.