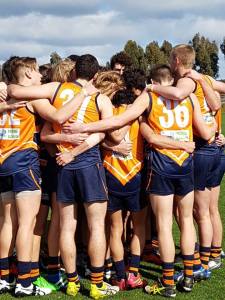 BACK-TO-BACK premier Oakleigh Chargers await Calder Cannons in a TAC Cup elimination final after a final-round win over Western Jets lifted the side to seventh on the ladder.

The Chargers finished sixth, while Calder climbed above Eastern Ranges after a last-gasp 10.10 (70) to 9.9 (63) victory at Rams Arena on Saturday.

The Cannons survived a late scare to record their eighth win of 2016 after the Jets drew level with 28 minutes gone in the last quarter.

After leading by as much as 15 points during the last term, Calder conceded two goals including a Mickey Nicholls major with only minutes on the clock.

Best-on-ground Ben Ronke sprinted clear from the next centre clearance, booting a point to put the Cannons back in front.

The result was sealed when debutant Jack Hannett found the impressive Jean-Luc Vellisaris in space and set up his third goal.

Vellisaris finished with 24 disposals, three goals, five marks and three tackles in his best match for the club, while Ronke continued his purple patch by gathering 31 disposals and making seven tackles.

Zach Guthrie, who had the job on dangerous Western forward Cam Rayner, was also named among the best players, alongside Noah Balta, Dylan Landt and Aaron Tatchell.

Calder had to dig deep to get over the top of a side which has had its measure in the past two meetings between the clubs.

The Cannons led by nine at quarter-time but Western seized momentum with a four-goal-to-two second term to take an eight-point advantage to halftime.

Calder defended brilliantly in the third quarter to reclaim the lead in a seesawing contest, before coming up trumps in a tense last term.

Cannons captain Jaidyn Owen said the side would carry belief into finals after winning its last game of the home-and-away season.

“If we play at our best I reckon we can go all the way, that’s the plan anyway,” Owen said.

“Momentum is great for us.”

Calder will have a week off before embarking on its finals campaign, with the four Victorian teams which missed the top eight to play at Princes Park this weekend.