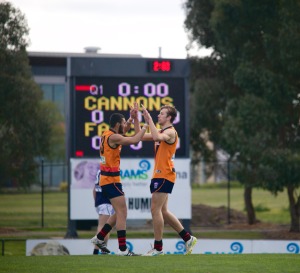 CALDER Cannons are intent on generating valuable momentum heading into TAC Cup finals with a last-round victory over Western Jets at Rams Arena on Saturday.

The Cannons will be aiming to bounce back from a 90-point defeat against Geelong Falcons in Round 16, the club’s third straight loss.

A mid-season surge has assured Calder will play finals again this year, but the defeat to Geelong dented the club’s percentage and saw it drop to eighth on the ladder with one round to play.

Cannons coach Andrew Johnston still said the side still had plenty to play for despite knowing for the past month it would face an elimination final.

“They’ve got all their players back, they’ll be up and about, they had a good win on the weekend,” Johnston told the Cannons Coaches Corner.

“They beat us early on in the year, so the challenge for us is to get ourselves right mentally and physically to come up against them this weekend.

“Hopefully we put up a better show than we have in the last few weeks.”

Calder has dropped its past two matches against the Jets by a combined 11 points and will be out to exact revenge for a two-point defeat in Round 8 this weekend.

Johnston said his team, which battled back from 22 points down at three-quarter-time to almost snatch victory at Burbank Oval, had learned a lot from their last meeting against Western.

“As I said to the boys on the weekend, we’ve earned to be in the finals,” he said.

“We don’t want to go in there, play one game and just put up the white flag.

“We’ve deserved to be there. We’ve just got to take some confidence out of this game, whether we win or lose, take some real confidence that we can take into the first final.

“And you never know, anything can happen.”

The first bounce of Saturday’s match is scheduled for 11am at Rams Arena.