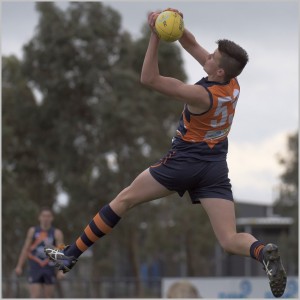 MITCH Lewis has primed himself for a strong finish to the TAC Cup season as he aims to improve his chances of being snapped up in this year’s AFL National Draft.

The key forward produced one of his best games for Calder on Saturday against Gippsland Power, booting four goals, reeling in 13 marks and gathering 33 disposals.

After playing school football for Assumption College, Lewis has returned to Rams Arena with a point to prove.

The Whittlesea junior would have had recruiters salivating at the weekend, showcasing his contested marking ability and willingness to compete in the air.

Both skills are areas he has been working on since missing out on selection for this year’s Under-18 National Championships with Vic Metro.

“If I’m getting to as many contests as I can, then I’m giving myself the best chance,” Lewis said.

Lewis was introduced into the Cannons’ set-up last year after juggling golf, cricket and football in recent years.

There was a point where he looked more likely to pursue a cricket career than football after being chosen in the initial Victorian under-17 squad and playing Premier Cricket seconds at Carlton.

But he decided football was where his future was last year and has not looked back.

“I was playing a bit of competition golf down in the city and over at the peninsula.

“I think my handicap is at about one at the moment.

“And then cricket, I was down at Carlton district cricket club playing in the Second XI when I was 15.”

Lewis, from Hidden Valley, will hope to continue his good form when the Cannons host Geelong Falcons on August 13 at Rams Arena from 2pm.

Here Mitch’s interview on this week’s The Blast Podcast: http://bit.ly/2b16MRf