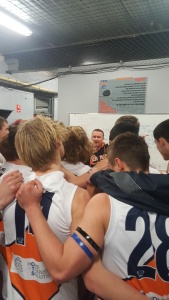 CALDER Cannons coach Andrew Johnston says the club’s bottom-age players will be exposed to TAC Cup football in coming weeks after the club’s top-four hopes were dashed by North Ballarat on Sunday.

The Cannons went down 13.14 (92) to 8.9 (57) in tough conditions at Eureka Stadium after being unable to capitalise on what Johnston rated a four-to-five goal wind during the opening term.

The signs were positive for Calder early, with Daniel Hanna and Ben Ronke goaling in the opening eight minutes to give the visitors an early 13-point lead.

But the Rebels hit back to tie the scores at 14 apiece at quarter-time before wrestling the ascendancy during the second quarter.

North Ballarat kicked four goals to one with the aid of a strong breeze, opening a 24-point gap at the main break.

The Cannons were within 18 points at three-quarter-time after a late Tyson Lever goal ensured the away side won the third term.

But that was as close as they got as the Rebels kicked away in the last quarter to secure a 35-point win.

“If you don’t take your opportunities, good sides will hurt you and North Ballarat are a good side, that’s for sure,” Johnston said.

“The reality is that internally, we rate our guys and they give themselves every chance. I’m not going to question their effort.

“Externally, we’re  probably not rated as highly as some of the other sides. We have to play well as a team…to give ourselves every chance.”

Calder is locked in for an elimination final after Sunday’s loss, sitting three games and percentage from fourth-placed Sandringham Dragons with matches against Gippsland Power, Geelong Falcons and Western Jets to come.

The Cannons also have enough of a buffer over ninth-placed Bendigo Pioneers that they can use the remaining rounds to expose the TAC Cup squad’s younger players to the competition.

“I think on the weekend we have to look at some of the 17-year-old now and give them an opportunity for 2017,” Johnston said.

“The 17-year-olds will come into consideration now, let’s expose them in the next three weeks and maybe a final to get them thinking about what they need to do over the summer to be really good players in 2017.”

Calder’s clash with Gippsland Power is on Saturday at Rams Arena. The first bounce is 2.30pm.