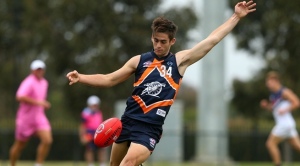 KEY forward Karl Brown will return to Calder Cannons’ TAC Cup side this Sunday after a two-match stint with VFL outfit Coburg.

Brown said he had learned a lot from being selected as the Lions’ 23rd man in matches against Sandringham and reigning VFL premier Williamstown over the past two weeks.

The 18-year-old enjoyed a strong debut against the Zebras, finishing with 11 disposals, seven marks and a goal.

He was quieter against the Seagulls, slotting one behind from five possessions and four marks.

But Brown has no doubt he benefited from the experience of playing for Coburg.

“I learned heaps, playing on some very good players and AFL-listed players or ex-AFL listed players who taught me some lessons,” Brown said.

Brown ran out with several former teammates for the Lions at Burbank Oval on Sunday, with Josh Cauchi, Ben Allan and Zak Wunhym among the ex-Cannons in the Coburg team.

“It is hard, there’s very good teams and quality opposition,” he said.

“But if you want to make the next level and be the best you’ve got to compete against the best.

“I wanted the challenge and I tried to embrace it as much as I could, playing on those players.”

One of those opponents was St Kilda defender Tom Lee, who Brown was blanketed by on debut before fighting back in the second half of Coburg’s game against Williamstown.

Brown may not be the only Cannon to head to Coburg, with Ben Ronke a chance to turn out for the club in the remaining rounds of the VFL season.

Hear Karl’s full interview about his Coburg experience on this week’s Calder podcast The Blast: http://bit.ly/29N2DyB