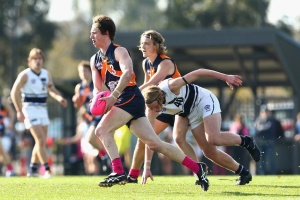 MATCHWINNER Lachlan Bramble breathed a sigh of relief when the final siren sounded on Saturday with Calder Cannons five points ahead of Northern Knights.

While Bramble nailed the goal which put Calder back in front heading into time on during the final quarter at Rams Arena, it was a chance a few minutes later which lingered in the back of his mind.

Bramble unselfishly tried to pass to a teammate inside 50 when he could have gone for goal, but the Knights turned the ball over to set up a nailbiting finish.

“We needed to stand up because we were down at that point,” Bramble said of his matchwinning goal.

“Being a leader, I needed to stand up and finally do something.

“I just lost my man, I was free and I saw an opening. (Liam) Middleton got it on the 50, so I just thought I’d stream through, he gave me the hands and I just finished it off.

“I was still quite nervous after that.”

Bramble, who was named in the initial Vic Metro squad, said he was enjoying the wave of momentum the Cannons have been riding over the past five weeks in the TAC Cup.

Calder has won its past five matches and seven of its past nine, climbing into contention for a top-four finish and to within one win of a likely finals berth.

“Give it a good crack and I guess when we play our best footy, we can give anyone a bit of a scare.”

Bramble, who won praise from coach Andrew Johnston for leading for Cannons’ charge during the fourth term of Saturday’s match, said he had been focused on being more aggressive.

“Definitely my tackling from last year, I wasn’t much of a tackler last year,” he said.

“I’m just trying to get that aggression to my game and just use my speed and use my strengths to better myself.”

Hear the full interview with Lachlan Bramble on this week’s Calder Cannons podcast, The Blast, which can be accessed via our Facebook page: http://bit.ly/29vJ1Qi