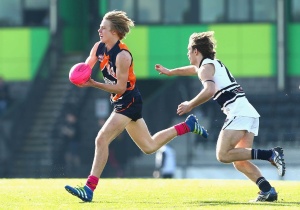 ANDREW Johnston sensed his coaching staff had done all they could.

With only a few minutes left on the clock and Northern Knights leading on Saturday, Johnston saw an opportunity for his Calder Cannons side to prove their mettle.

The Cannons did just that to record their fifth successive TAC Cup win at Rams Arena, triumphing 10.7 (67) to 8.14 (62) thanks to a late goal from Lachlan Bramble.

It was a scare Calder could not have foreseen after leading by 25 points at halftime in the Round 13 contest.

But as has often been the case in recent years, a game between the two northern neighbours was decided in the final minutes.

After being held goalless in the second quarter, the Knights cut the margin to 16 points at three-quarter-time.

The visitors put four goals on the board in the last quarter but the Cannons lifted when it mattered most, claiming their seventh win of 2016 to close to within one victory of a finals berth.

“They had their best side in for the year,” Johnston said.

“We needed to be up and about, which to our boys’ credit we were in the first half.

Ben Ronke continued his outstanding form through the centre of the ground in the victory, while Jean-Luc Velissaris, Hayden Blythe and co-captain Muhammad Saad played important roles.

Ronke will likely head to Coburg in coming weeks after producing a purple patch of form.

Saad, Tom Burnside and Liam Middleton all booted two goals in the five-point win, proving the Cannons can cope without spearhead Karl Brown.

The TAC Cup’s leading goalkicker made his VFL debut with Coburg on Saturday, finishing with 11 disposals, seven marks and one goal.

“There was a good mixture of guys,” Johnston said.

“Rather than relying on one bloke, we were able to get a mixture of goalkickers which was good.”

Calder will be without first-choice ruckman Ovie Magbegor in coming weeks as he pursues basketball opportunities in the USA.

The dual sportsman has been selected to take part in a tournament where he will be closely watched by scouts from colleges across the USA.

“They picked the squad a month or so ago. They go and play against some college teams and…the universities might look at giving them scholarships.”

Calder’s match against Northern Knights also served as a fundraiser for the Breast Cancer Network Australia, with the colour pink prominent around the ground at Rams Arena on Saturday.

Rams Home Loans donated $100 per Cannons goal to the organisation, while donations were also made by spectators at the ground.

Calder would like to thank Rams and everyone who chipped in for their generosity and support for the BCNA.

Saturday’s win kept the Cannons in sixth spot on the ladder ahead of the TAC Cup bye, with the club’s next match on July 24 against North Ballarat Rebels.