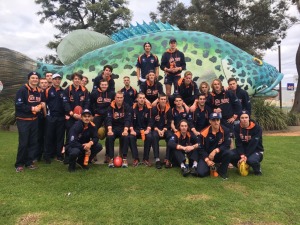 The match was still in the balance at halftime, with Calder holding a 20-point lead after booting four goals to one in the second quarter at Tyntynder Football Netball Club.

Brad Bernacki, Ben Ronke and Ben Caluzzi were also prominent after halftime, allowing the Cannons to seize control of the Round 12 contest.

But Balta, part of a two-pronged Essendon Doutta Stars forward set-up alongside Karl Brown, led the way as Calder powered to a 38-point three-quarter-time lead.

“He’s got some special athletic attributes and for a 10-minute period there I think in the third quarter he was jumping and cleaning up balls and kicked three goals,” Calder coach Andrew Johnston said.

“It was a huge difference during that third quarter.”

In Ovie Magbegor’s absence, Macedon junior Jacob McNicol stepped up in the centre of the ground carrying No.1 ruck duties.

Johnston said McNicol benefited from greater opportunities in his fourth game of the year after playing in three matches as the 23rd man.

But it was Ronke named best afield for his constant pressure and efforts feeding Calder’s forward six.

“He probably started slow like the team but he was really able to break the game open,” Johnston said of Ronke.

“(He was) really good clearances in the second quarter and gave us some good drive going forward.”

Sunday’s victory squared the Cannons’ season at 6-6 after the side lost its first four matches of 2016.

“Losing those few games early in the year, we’ve had to play a little bit of catch up,” Johnston said.

“Now we’ve caught up we have to try to maintain that. That’s going to be the challenge for our blokes.”

Calder’s next challenge comes against Northern Knights on Saturday from 11am at Rams Arena.

Johnston said the Cannons would need to be at their best against a team fighting for a top-eight berth.

“They’ll certainly want to try and have a bit of a say in who does and where they finish in terms of the eight,” he said.