Cannons grow closer on the road 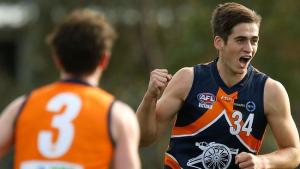 CALDER Cannons coach Andrew Johnston says the club’s players have been “galvanised” by two straight away matches against Eastern Ranges and Dandenong Stingrays which have resulted in emphatic wins.

The 59-point victory was Calder’s third in five trips away from Rams Arena this year and another step in the right direction, according to the Cannons’ coach.

“We’ve been really good on the road,” Johnston said.

“What it does is just galvanises the group. The group has been really close the last 6-8 weeks.

“Getting away and getting on the road is going to be really pleasing whether we win or lose, I think it galvanises the group even closer.”

Calder has played away five of the past seven rounds and will travel to Swan Hill this weekend to face fellow finals aspirant Bendigo Pioneers.

“We’re heading in the right direction and the last 6-7 weeks has been really positive,” Johnston said.

Karl Brown was the catalyst behind Saturday’s win over Dandenong, booting three goals in the opening quarter as Calder established a 31-point quarter-time lead.

The Stingrays proved a more formidable opposition in the second quarter, but with Hayden Blythe, Ben Ronke and Ben Caluzzi all heavily involved, Calder built to a 32-point halftime margin.

The Cannons put their foot down in the third quarter to open a 48-point gap between the sides before ramming home their advantage in the last term.

“It’s not just the result on the scoreboard it’s how we’ve got about it that’s been really pleasing,” Johnston said.

The Calder coach said the club hoped Brown would help to VFL side Coburg in coming weeks to prove his worth to AFL recruits.

The Essendon Doutta Stars junior has 38 goals from 11 matches after he was the dominant player on the ground in Saturday’s win.