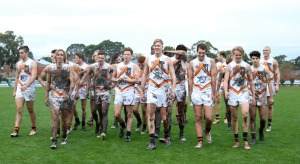 Story by U18 player Jack Thorogood

Calder Cannons shone against Eastern Ranges on Saturday, overcoming the best midfield in the competition by six goals at Box Hill City Oval.

The boys produced an accomplished brand of footy, with leaders Jackson McDonald and Jaidyn Owen stepping up to the occasion and playing with composure.

After a slow start to the TAC Cup season, the Cannons are playing with a new-found confidence which will hopefully hold them in good stead for the rest of the campaign.

Eastern, who are number one for clearances in the TAC Cup, definitely gave the Cannons are run for their money in the first five minutes of play, kicking two easy goals and making a perfect start. Yet, the boys from the north-west found a reply.

Calder used the muddy centre at Box Hill to its advantage, surging the ball into its forward 50 regularly in the opening quarter.

Debutant Noah Balta emphasised his talent, booting a goal from 50m out to get the boys started for the day and the goals continued to go over the umpires hat.

The forward line pressure was phenomenal from the Cannons and definitely gave them the start the coaching staff were hoping for.

The positive opening propelled them to a four-goal lead at quarer-time with multiple goal scorers.

However, it wasn’t just the forwards converting opportunities, with the backs again on song.

Backline coach Damien Keeping urged the defenders to be more attacking at the first break, which would prevent the oppositions' quick rebound by applying pressure to Eastern and furthermore, turn the ball over.

Through the likes of Mitchell Podhajski and Owen, the backs’ attacking mindset demonstrated their eagerness to put words into actions.

The contested work persisted around the ground and the Cannons continued to thrive in the next half.

Calder Cannons’ forwards were in sync throughout the day, a total team effort knocking Eastern Ranges off their feet.

The Cannons appear to have found their groove and will hope to bring a similar swagger in their clash with Dandenong Stingrays this weekend.