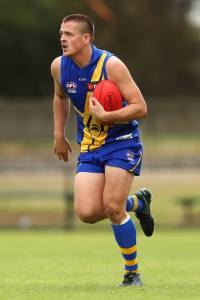 It was finals time last Saturday at MARS stadium where the Jets and Knights met for the third time this season. From the opening bounce, the Knights had a heavy wind advantage and it showed.

The clearances were dominated by Northern as three quick goals had Western recalling the last time they met. Eddie Ford tried to stem the flow after a great screamer but Northern quickly recovered the ball.

The Knights would kick another three unanswered goals to end the term as the Jets regrouped.

With the wind now at the Jets backs, the game turned on its head. Northern proved resilient at first, but one mistake gifted Nash Reynolds a quick snap to get the Jets on the board.

A great pack mark from Emerson Jeka saw him claim his first major while Archie Manton's clever soccer goal had the Knights in a panic. Failli was everywhere working hard offensively and defensively.

Another quick play for the Jets saw Mace Cousins kick another unanswered goal while Josh Honey unleashed a monster to tie the game up at halftime.

In the third term, the wind did not yield as the Knights bounced back. Two unanswered goals went in Northern's direction but Failli responded after some great forward pressure by Manton saw Failli crumb a beauty.

It was the first time any team had kicked against the wind but the Knights quickly responded to take the lead. After a 10 minute tug of war, the Knights booted another major. But Manton struck back after some hulking work to get rid of his opponent, he kicked his second goal of the day.

Fellow tall timber Aaron Clarke was next to line up for his first after a great chase down tackle had him line 40 metres out from goal. Clarke made no mistake with the Knights only five points ahead with the wind heading into the final term.

The last quarter was a real test of character. But with the advantage, William Kennedy dominated the ruck taps and fed Jonah Horo and Daly Andrews well in the midfield.

The Jets were dominating play and the Knights were struck down by injury as key players for Northern were dropping like flies.

Manton stood up again to snap his third followed by a free-kick that had him line up directly in front for his fourth. The Knights retaliated with another goal to edge the margin, but their hope was shattered after a long bomb by Reynalds sealed the game.

Hero of the day: Lucas Failli

Perhaps Failli's best game of the year as he proved a real difference by providing real x-factor. His numbers may not have been massive but every touch he had was efficient. He finished the game with 14 disposals, 4 marks, and 6 inside 50's.