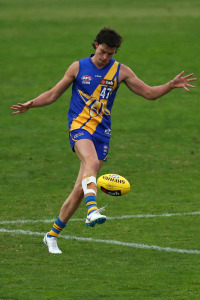 A tough start to the game ended in a one-sided affair as the Jets cruised home for the win. Both teams were inaccurate in front of goal, but the end result saw Western Jets 7.8(50) defeat Geelong Falcons 2.10(22).

Geelong started off getting plenty of the ball early but Westerns' defence was holding firm. Darcy Cassar and co-captain Lucus Rocci were linking up well in the backline as their foot skills made all the difference. The Falcons continued to press but through sheer determination to push the ball forward, the Jets kick the first goal through Samuel Clifford. Geelong would bounce back quickly, but after the first two goals were kicked, missed opportunities at goal went begging for both teams.

The Jets went into a frenzy in the second term as goals were all being scored in their direction. Archie Manton was first to claim the Jets second after a lace-out pass from Jonah Horo had him line up from the goal square. Geelong would continue to pass up on their chances inside 50 as the Jets bounced back with a vengeance. Aaron Clarke would secure his first goal followed by Baily Ryan. Clarke would pop up again in the forward line as a toe-poke off the deck got him his second goal before halftime.

The third term saw the Falcons come out with real purpose and yet with all their efforts, they only managed minor scores. Halfway through the quarter, Josh Honey would boot another for the Jets as the Falcons couldn't take a trick. Archie Manton would sneak in his second just before the buzzer as the Jets looked invincible.

The final act was a stalemate of continued stoppages, the Falcons finally got another goal but with a score of 2.7, the game was over. The Jets only blemish was the failure to kick a goal in the final quarter as the Falcons kept them goalless for the term.

Hero of the Day: Lucas Rocci

Rocci had a day out last Saturday. He was a ball magnet, with elite kicking that showed major influence off halfback. With Josh Kellett injured, fans were wondering who could fill the void and Rocci did that in spades. He finished the game with 28 disposals, 11 marks, and 7 rebounds. A first-class effort from the co-captain.