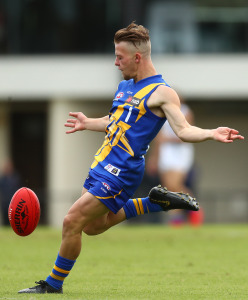 Goal Kickers: A. Clarke 4, S. El-Hawli 3, C. White 3, C. Mackenzie-George 2, A. Manton 2, L. Failli, S. Clifford, L. Conway, J. Horo
Best Players: J. Horo, A. Clarke, D. Bolkas, C. White, D. Andrews, W. Kennedy
After two straight losses in the past two weeks,  the Jets came to Downer Oval with an arsenal of bombs. NT Thunder was absolutely obliterated by a hungry Jets who walked out 71 point victors. It could have been worse for the Territorians if Western's forwards kicked accurately.
The first quarter started with Thunder scoring first blood, the speed of NT showed early as outside run proved to be in NT's favor. The Jets quickly replied with Samuel Clifford off a great forward pressure act. Another was scored through White, Western was building confidence but an opportunistic snap by NT had them take lead. It would be short-lived as Jonah Horo showed some class in front of goal to have Western trail by a point on the siren.
The second term saw Horo and Bailey Ryan get really busy in the midfield and Thunders defense were under siege. First-gamer Mackenzie-George booted his first to put the Jets in front but the goalsneaks of NT struck back quickly. The Jets continued to apply the pressure in the midfield and tall forwards Archie Manton and Aaron Clarke were reaping the benefits. Clarke had been inaccurate early, but his third attempt at goal made no mistake. An avalanche of goals would head Westerns way as Clarke, White, and McKenzie George slotted their second majors for the game. Clarke would continue to cause headaches to boot his third as they head into halftime.
The second half was all Jets, Clarke continued to dominate marks inside 50 leaving his opponent in the dust. His fourth goal set the danger bells ringing for NT. Saad El-Hwali would add to the damage with Thunder having no answer. A stalemate would last for 15 minutes with only behinds benefiting both teams. Liam Conway broke the drought as they head into the final quarter. Here the Jets turned on the afterburners and hit NT with a bombardment of goals. El-Hawli and Manton and kicked two apiece while Lucas Failli put the icing on the cake for a great Western win. The Jets have now won two of their four matches but will have a tough task against the Tasmanian Devils in two weeks.
Hero of the Day: Jonah Horo
Possibly one of the most talented players in the team. Horo's ability to win the ball at the contest and still maintain his composure on disposal is first class. Outmanned or out-positioned, he somehow manages to win the impossible contests. Horo finished the game with 18 disposals and five inside '50s.