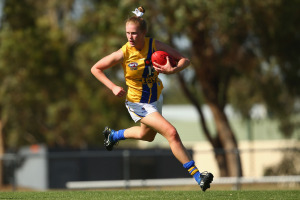 After four weekends of painful losses, the Jets girls were desperate for a win. That is what received last Sunday as the Western Jets smoked the GWV(Greater Western Victorian) Rebels by 22 points at their home ground. This victory would mark the anniversary of their last win the previous year and with the last quarter blitz, the girls looked like a completely different team.

The start of the game had Western apply real pressure in the center of the ground. Elisabeth Georgotathis and Isabella Grant were on fire in the early stages, and the inside 50's proved it. Westerns forward line was missing Cleo Saxon Jones but the Jets had found another weapon in Laura Wight. Wright drew first blood for the game kicking her first major for the season but it would not be her last. The Rebels quickly replied with one of their own, a goal late had the game tied up at seven points apiece.

As the second term kicked off the Rebels claimed another six points to hit the front. However, Wright would reply quickly to fire up the Jets and get them back in the contest. The pressure of Jets continued to dominate the contest but a costly mistake had Rebels capitalise and retain the lead heading into halftime.

The Rebels went into the premiership quarter five points up but nothing prepared them for what happened next. Grant and Georgostathis had the ball on a string, intensity from the Jets skyrocketed as they began to pepper the goal face. Rebels tried desperately to clear the ball, but a defensive wall set up by Western made that impossible. For ten minutes the jets bombardment managed two behinds and a late goal by tall timber Jasmine Goodman. The Jets would go into the final round with a three-point lead.

The final act was crunch time as both teams threw everything they had at the contest. Rebels were starting to get the upper hand but failed to convert. The Jets on-the-other hand had it raining gaols on the ocean side of Downer Oval. Caitlin Sergent and Payton-Ani Ozols went bang kicking two goals each, but the star of the day in Wright put the icing on the cake bu booting her third. In the end, it was a proud day for coach Zach Reid and his girls in what could be a new chapter for the Western Jets.

Hero of the Day - Laura Wright

For a girl who thought she didn't know where she belonged a week ago, she has found herself to be the new spearhead of the Western jets. In one game she has become the clubs leading goalkicker and found out where she belongs. The Jets forward line.