Rayner No 1 as Fogarty and Xerri also find AFL homes 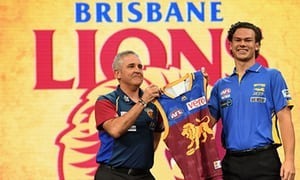 Cameron Rayner has become the first Western Jets player to be selected as the Number 1 pick in the 2017 AFL National Draft last Friday night by the Brisbane Lions.

Cameron had a standout 2017 that saw him earmarked as the potential number 1 pick with his ability to open games up with his pace and strength along with his elite agility.

Cameron was named as the Full-Forward in the TAC Cup Team of the Year and was a part of the AFL Academy as well as the winning Vic Metro National Championship team in which he was also an All-Australian.

Lachlan's 2017 paralled Cameron's as he was selected by Geelong with the 22nd pick.

A brave and crafty midfielder with good decision making ability and excellent by hand and foot, Lachlan finished 2nd in the club's Barry Round Medal despite playing fewer games.

Like Cameron he was named in the TAC Cup Team of the Year on the wing as well as being a part of the AFL Academy and Vic Metro National Championship team where he received All-Australian honours.

Tristan's 201cm frame as well as some strong performances in the National Championships for Vic Metro as well as Werribee's VFL team saw him taken with the 72nd pick by North Melbourne.

We wish all the boys the best as their AFL journey's begin.