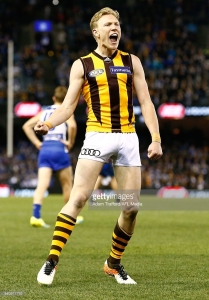 Sicily (pictured) who has had a fantastic year kicking 23 goals from 16 games earned the nomination on the back of a dominant game against North Melbourne kicking 5 goals straight from his 13 disposals.

This is James' third season of AFL Football after being taken by the Hawks with pick 56 in the 2013 AFL National Draft. Sicily did not debut in season 2014 but showed very promising signs in the VFL, starring in Box Hill's Grand Final loss to Footscray. James debuted in season 2015, managing 3 games but in 2016 James' talents have really been on display in the Hawks forward line.

Everyone at the Jets is looking forward to watching James progress his AFL career and will set back and enjoy the ride.