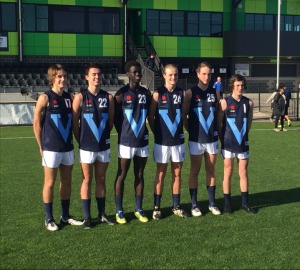 Congratulations to Xavier O'Halloran, Owen King, Buku Khamis, Hamish Murphy, Stefan Radovanovic and Zak Butters from the Western Jets State U/16 Brad Johnson Squad who have made the final 25 player squad that head to the Gold Coast for the U/16 National Championships in early July.

Good luck to the boys pictured.