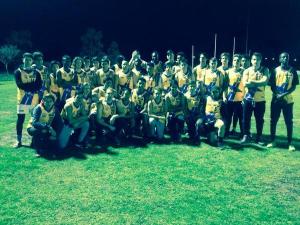 The Western Jets are once again conducting the Majak Daw Multicultural Squad in season 2016. During the second term school holidays players from the Western Metropolitan Region of Melbourne aged between 15 and 18 who are from a Multicultural Background with above average ability in Australian Rules Football are being given the chance to participate in this squad.

The Squad trains on Tuesday nights in conjunction with the TAC Cup squad with 35 players attending training so far through the program. Gary Brennan who is the U/16 Brad Johnson Squad Head Coach is coaching the Squad with assistance from Talent Manager Shane Sexton. The boys involved in the Squad have access to all the same staff that the TAC Cup Squad do with the Club physio, strength & conditioning staff and trainers all on hand each Tuesday night.

In the past there have been some fantastic success stories come out of this Squad with the number one story being the rise of Brayden Monk. In 2013, as a bottom aged player Brayden missed out on selection in the Western Jets TAC Cup Squad. He however kept believing and perceivering with his football and got an opportunity to participate in the Majak Daw Squad, he excelled during this program and was subsequently given an opportunity by being selected in the 2014 TAC Cup Summer Training Squad. Brayden went on to make the 2014 TAC Cup Squad and then won the Barry Round Medal for the Western Jets Best & Fairest Award. Brayden then went on to play for the Jets as a 19 year old in 2015 before being selected by Williamstown in their VFL Squad in 2016.

The Western Jets look forward to the next success story through our Majak Daw Squad. The boys have enormous opportunities in front of them and are gaining great experience with Majak himself attending the majority of the sessions and offering his guidance.