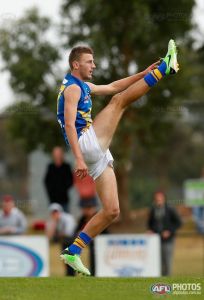 Congratulations to Brenton Payne who was taken at pick 37 by the St Kilda Football Club in the AFL Rookie Draft. Payne who is a product of the Bacchus Marsh Football Club had a much improved season as a top aged player. Brenton won the Western Jets goal kicking even with AFL U/18 National Championship duties and spending much of the second half of the season at centre-half back. Payne who is 193cm, has the ability to play at both ends of the ground. Everyone at the Jets wishes Brenton all the very best for his AFL career.