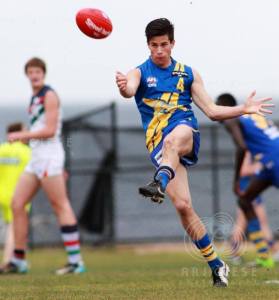 Congratulations to Liam Duggan, Corey Ellis, Jayden Laverde, Dillon Viojo-Rainbow and Connor Mendaue on being drafted in the 2014 AFL National Draft held on the Gold Coast.

Liam Duggan was taken at pick 11 to the West Coast Eagles. Corey Ellis went to Richmond with pick 12. Jayden Laverde was next with pick 20 meaning that he is now at the Essendon Football Club. Dillon Viojo-Rainbow was another taken in the second round which will mean he is now a Carlton Football Club player and Connor Meandue was taken at 33 and will join Corey at Richmond next season.

Not only was it a great result for the Club having 5 boys taken but they were all in the top 33 selections in the Draft which was the best of any TAC Cup Club.

Everyone at the Western Jets wish Liam, Corey, Jayden, Dillon and Connor all the best for their AFL careers.