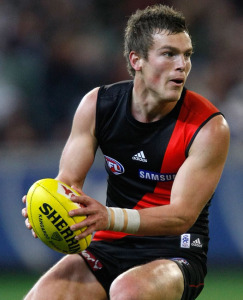 300 game champion and current AFL assistant coach Shannon Grant was amongst some of the earliest players to be drafted from the Western Jets. A member of the 1994 TAC Cup Team of the Year and winner of the Barry Round medal, Grant was selected by Sydney in the 1994 national draft. Playing 58 games for the Swans, Shannon decided to move back to Victoria, joining North Melbourne in 1998. In 1999, Grant was a member of the Kangaroos premiership team, collecting the Norm Smith Medal for best on ground. He went on to win North Melbourne’s Best and Fairest in 2001, and earn All-Australian selection in 2005, representing Australia in the International Rules series the same year.  Grant retired in 2008 after 301 games (58 Sydney, 243 North Melbourne) and 361 goals.

Following his retirement, Grant took up a coaching role in the game he once dominated. A two year period with the Essendon Football Club saw Grant fill the roles of Bendigo Bombers Senior Coach and Development Coach, leading the Bendigo Bombers to successive finals appearances in 2010/2011. At the conclusion of season 2011, Grant moved to the Western Bulldogs taking up the position of Assistant Coach, which he still holds to this day.

2012 draftee and former Jets player Lachlan Hunter is taking massive strides forward in his second season at the Western Bulldogs. Drafted by the Dogs as a father-son selection (#49 overall), it wasn’t until halfway through his first season that Hunter got the opportunity to play in the senior side. In round 13 Hunter received the call up, and went on the play in 9 of the clubs remaining 11 matches. Hunter averaged 13 disposals in those games, including a career high 25 against Melbourne in the final round.

Season 2014 has seen Hunter aim to cement his place in the senior side, playing 7 of 10 games. Averaging 14.4 disposals a game including 24 in round 1, Hunter hasn’t been doing his chances any harm.

Brent Prismall was a member of the 2004 TAC Cup Team of the Year and runner up in the Barry Round Medal the same year. Drafted at the end of 2004, Prismall was selected by Geelong with pick 32 overall. After playing the entire 2005 season in the VFL, Prismall made his debut in round 5 2006 for the Cats, but only managing a further 7 games due to injury. 2007 and 2008 again saw Prismall have his years ruined by injuries, and after 25 games with the Cats Brent requested a trade at the end of season 2008.

Prismall was traded to the Bombers, where he played a further 36 games between 2009-2012, but his career was ultimately ruined by injury, delisted by the Bombers at the end of 2012. In season 2013 Prismall joined Williamstown in the VFL, and took on the role of Player Welfare Officer for the Western Bulldogs. This year, Brent has moved across to join Footscray in the VFL, whilst continuing his welfare role at the Bulldogs.