Where are they now? Round 9 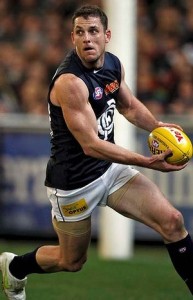 Former Jets players Heath Scotland announced his retirement from AFL football recently and we would like to congratulate Heath on a stellar career. A member of the Jets 1998 TAC cup side, Heath was a standout player, earning selection for Vic Metro and the TAC Cup team of the year before going on to get selected by the Magpies with pick 44 in the draft.

Scotland’s AFL career spanned over 16 seasons at two powerhouse Victorian clubs; Collingwood and Carlton. His list of achievements during this time is nothing short of impressive, representing Collingwood in two Grand Finals (’02 and ’03) under Mick Malthouse, finishing at the Pies with 53 games. A move to Carlton in 2004 saw Scotland flourish, winning a club best and fairest in 2012 after finishing runner-up in 2007.  Heath earned an All-Australian nomination in 2011, and will finish his career a life member at Carlton, notching up 215 games and finishing with a career total of 268 games.

Congratulations to 2006 Jets draftee Bachar Houli on reaching 100 games on the weekend. Bachar was initially drafted by Essendon following his TAC Cup years with their third round selection (number 42 overall). After playing 26 games at the Bombers, the conclusion of season 2010 saw Houli picked up by Richmond.

Houli was the first devout Muslim to play AFL, and is an AFL Multicultural Ambassador. An integral member of the senior team, Bachar has been able to cement his position in the football landscape and in season 2014 averages 21 disposals a game.

Former Jets gun Cameron Lockwood has been playing for Williamstown’s VFL side since 2007. Lockwood represented the Jets in 2005 and 2006 and became the first player to win the Barry Round Medal twice, winning it back to back in his playing years. Cameron was named for Vic Metro and was a member of the TAC Cup team of the year in 2006.

After being overlooked in the draft, Lockwood was picked up by Williamstown and has been there ever since. In 2013 Lockwood won Williamstown’s best and fairest. Cameron is also the current Vice-Captain as he aims to lead Williamstown to a VFL Grand Final appearance.