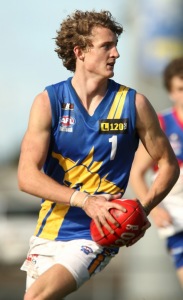 Former Western Jets players Kyle Hartigan and Johnny Rayner have both made significant steps in their football careers. Both players were part of the class of 2009 which also included Trent McKenzie drafted to the Gold Coast and Jack Fitzpatrick who was drafted to Melbourne. The upgrade of Hartigan and Rayner now makes the 2009 Western Jets group one of the most successful in well over a decade.

Kyle Hartigan's pathway included a stint with Werribee in the VFL before he was rookied to the Adelaide Football Club. Hartigan played his first senior game at the Crows in the 2013 season and has now been elevated to the Adelaide list.

Johnny Rayner's rookie selection at the Essendon Football club has been via the Alternative Talent Player Program. Rayner has always combined football and athletics being a very accomplished 400m and 800m athlete representing Australia's youth athletics team. Recently he has also combined studying for a medical degree at Melbourne University with his athletics. Rayner was in contention for the 2009 draft and unfortunately missed selection at that stage. However, as is becoming a growing trend at the Western Jets he has now been selected at an AFL Football Club as a mature aged player.

The Western Jets wish both Kyle and Johnny all the best for the future with their football careers.