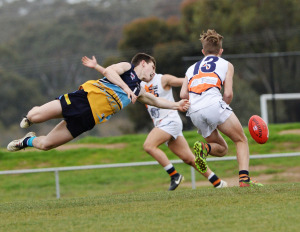 A squad of 35 includes 12 from Goulburn Murray clubs and nine from the Bendigo Football Netball League.

Almost a third of the squad were bottom-age players in 2015.

In what will be his second season as coach, Brett Henderson said the challenge for every player was to improve fitness, skills and strength.

“We have a great mix of those who have played TAC Cup and those ready for the next step,” Henderson said.

“As last season went on we promoted a few players from the under-16s squad to TAC Cup level.

“As a coaching panel we were really pleased with what the under-16s were able to do.

“They know what to expect and I’m sure will continue to develop and be key players.

“There is a lot of talent in this group, but workrate will be so crucial.

“For every player named on the list it’s now about doing everything they can to be ready for pre-season and then next year’s matches.

“It’s important not to just be satisfied with being named on the list, but working harder than you have previously to be an even better player.”

The build-up to a new season included a selection trial for the rookie squad on October 1 at Epsom-Huntly Recreation Reserve.

Henderson said a group of 45 had responded to invites to the rookie try-outs.

“Players selected in the rookie squad are a chance to be promoted to the main list at any time.

“We really want hot competition for places in our squads and to play in TAC Cup matches.

“Teams will be 16 a side and the match is likely to be six terms,” Henderson said of the trials format.