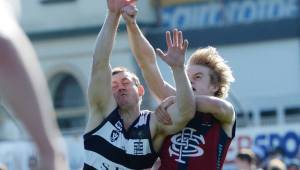 ONE of Lachlan Tardrew’s toughest days in footy could turn out to be the game that makes his career.

Tardrew and his Sandhurst team-mates were left gutted by Saturday’s seven-point loss to Strathfieldsaye in the BFNL  grand final.

However, Tardrew’s performance to restrict Strathfieldsaye star Sam Mildren to one goal in the grand final, combined with the body of work he produced across the finals series, has bolstered the teenager’s hopes of being picked up by an AFL club.

Tardrew won the Bendigo Pioneers club championship as a midfielder, but showed his flexibility in the BFNL finals where he was used by the Dragons in the backline.

He played on small and medium forwards before being used at full-back on Mildren in the grand final.

“No doubt there’s been some (AFL) clubs watching him in the past month and he hasn’t done his chances of being drafted any harm, if anything, he’s improved them.”

Henderson said it was no surprise Tardrew impressed in a new role with the Dragons.

“Wherever Lachy plays you know he’s going to fill his role,’’ Henderson said.

“As far as being easy to coach is concerned, Lachy is in the top five of players I’ve ever coached. He’s a ripper.

“He reads the play so well and gets into the right position. He relishes the physical stuff,’’ Henderson said.