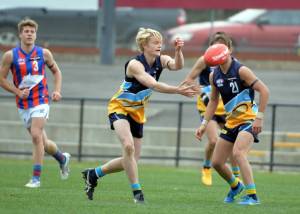 The hardworking onballer from Sandhurst racked up 45 votes in the race for the under-18 team’s best and fairest title.

A “fringe” player at the start of the 2014 season, Tardrew kicked on to be the most dynamic player for the Pioneers in 2015.

“To be named club champion is a huge honour,” he said.

“A lot of great players have earned this award, so to be recognised in the same way means a lot.”

Sheer hard work and a “don’t give up” were the keys to Tardrew’s success.

Extra work away from the club included gym sessions and running drills to increase strength and fitness.

He said to play for the Pioneers was a “great opportunity” and experience.

He said the club’s coaches, team-mates, support staff, and parents Peter and Wendy had all played crucial roles in his on-field success.

Other major award winners for the 2015 TAC Cup under-18s season:

The best players in the unbeaten run for the Pioneers in the under-16s country titles were Mildura’s Lochie O’Brien, Nyah’s Brent Daniels, and Laine Fitzgerald from Balranald.