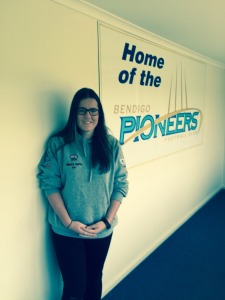 Spotting the next batch of recruits to the Bendigo Pioneers Football Club’s under-18 and under-16 lists is a key role that Taylah Morris has to play.

Taylah began her recruiting role with the club about a month ago and has cast a keen eye over several under-18 matches in the Bendigo Football League.

There are at least six prospective recruits that Taylah will watch in this Saturday’s under-18s clash between Golden Square and Eaglehawk.

“I am given a list of players to watch, but there may be others who are a standout and I will list in my report to Brett and Steve,” said Taylah.

Watching matches is not just about who racked up the kicks, marks and goals, but also a keen focus on workrate, disposal efficiency and key performance indicators.

From Manangatang, Taylah is a second-year student in sports development and management at Latrobe University Bendigo.

“Sports recruiting was an area I was keen to be involved with,” Taylah said.

“I approached the Pioneers about being involved and am rapt to have been given the opportunity.

“It’s been a great challenge and valuable experience.

“The long-term goal is to be on a recruiting team for an AFL club.”

Many Pioneers made their way from playing in the AFL Victoria TAC Cup under-18 competition to star in the big league.

When not studying for her degree or watching football matches, Taylah plays netball for Strathfieldsaye Storm in B-grade.

It’s her third season at Strathfieldsaye.