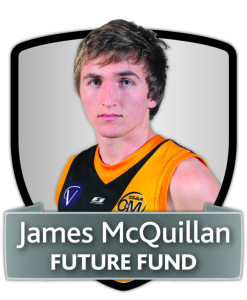 This is your chance to assist James McQuillan rebuild his life.

On Saturday the 5th of April 2014, 7 minutes in to the second quarter during a clash between the Albury Tigers and Yarrawonga Pigeons, 20 year old James McQuillan sustained a serious spinal cord injury during a routine collision with an opponent. James was airlifted to the Austin Hospital that night and had surgery the next morning and he stayed at the hospital for recovery. On 12/5/14 James was moved to the Royal Talbot Rehabilitation Centre to start his rehab.

In April of this year, James was enjoying the ideal life of a young man. He was nearing completion of his university degree, playing a hard game of footy every weekend and enjoying plenty of good times with his mates and girlfriend. Now he is a quadriplegic. He won’t see home again until November when his rehab is complete. He won’t play a game of footy again. His family have had to relocate to Melbourne in order to take care of him and none of their lives will ever be the same.

James has Bendigo connections with mother have grown up in Bendigo with his grandparents and uncle’s family still residing in Bendigo. In addition, James played in the TAC cup for the Bendigo Pioneers (alongside AFL players Jake Stringer and Ollie Wines – James played Echuca rep. footy with Ollie and Jack Viney also).

James was in the third year of a Physiotherapy degree in Albury which he still hopes to complete some day. As part of his studies in 2013 he completed a four week placement at St John of God hospital in Bendigo, and prepared for his finals by training with the Strathfieldsaye Football Club in their finals campaign.

On Friday August 15th there will be a Fundraising breakfast at Green Olive Warehouse (Eve Court, Bendigo) with sittings at 7 and 9am. We are currently negotiating for some ‘big name’ panelists for the second event which will be a Sportsmans Night also at the Green Olive Warehouse, the (October) date will be confirmed once the speakers are locked in. The third event is a Corporate Golf Day at Neanger Park Golf Course in February 2015.

St John of God Hospital (led by the Allied Health team) and the Strathfieldsaye Storm FC are also conducting some fundraising activities.

If you would like any further information I would be happy to take your calls or email queries or you can visit www.jamesmcquillan.com.au. To see more of James’ story check out the links to the interview on the Footy show  and a piece shown on Seven news James on Prime7.