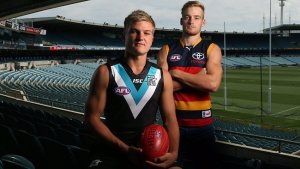 SAM Kerridge and Ollie Wines have followed similar paths to the AFL, shining at the Bendigo Pioneers before becoming top draft picks at the Crows and Power respectively.

The two country lads are now focused on using this year's NAB Cup competition - which begins at AAMI Stadium today with a triple-header involving St Kilda - to arrive at the same destination: in the starting 22 at their clubs for Round 1.

Both have legitimate chances.

Kerridge, taken with pick 27 in the 2011 draft and with one year of AFL under his belt, is seen by many in Adelaide's inner circles as one of the most likely youngsters to make the leap this season.

He has added a bit of extra muscle to his frame in the pre-season, and after a brief taste as a substitute in Round 3 last year against Hawthorn he is ready for more regular action.

"I'd like to squeeze my way into the midfield and half-forward," Kerridge said. "The NAB Cup is definitely important. This is a chance to show what you've got and play well, to try and forge your way in."

In fact, they could strike a mental blow by defeating a Power side which features most of their top-line players.

"That's definitely something to think about," Kerridge said.

"But with such a young side in we're just going out trying to play our best footy. Like Brenton said the other day, everytime we go out we're expecting to win."

Power fans should be lining up to see Wines - taken with pick No.7 in last year's draft - in action.

The physically imposing teenager is the inside midfielder Port has been craving and wants to make his mark in the NAB Cup.

"It's a good time to put your name out there and really present strongly," Wines said.

"I'm feeling ready. I've got my head around the game-plan and all the structures and I think it will be good to put it all into practice.

"I think it will take a bit of time to really find my feet, but I've got the mature body to be able to handle it and take the big knocks.

"If I can keep going the way I'm going and keep improving and find some form I think I can force my way in."

Wines was buoyed by his performance in Port's intrasquad trial last week and has held his own at training.

"Everytime you get out there and play against men it really puts your confidence up and you think that you belong," he said.

"The intra-squad trial and all the match practice during training has really helped my confidence."

Wines, who only got his first look at AAMI Stadium last week, said the Power were equally confident of progressing to the next round of the pre-season competition.

"What Ken has been stressing is we just want to win every game we play," he said. "And we're up against the Crows so we're going to play to win it."