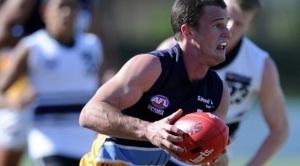 The Pioneers teamed well to be within nine points at half-time, but Sandringham’s efficiency through midfield and in attack proved too much as the match went on.

Despite never giving up, Bendigo battled to halt Sandringham’s run and its wealth of attacking options.

Pioneers coach David Newett said the team made a great start in terms of intensity at the contest and pressure acts when the Dragons had possession.

A flurry of late goals put Sandringham up, 30-12, by quarter-time.

Bendigo capitalised on the breeze in the second to score 4.2, of which Strathfieldsaye Storm onballer Sam Heavyside kicked two.

The third quarter was to be the most decisive of the contest as Sandringham slammed on 5.4 to a goal.

“We felt at half-time that if we could be within three or four goals at the last change we had a chance to win,” Newett said.

But it was Sandringham which won a high-scoring final term, 6.3 to 4.1.

Newett said the Dragons forwards were dangerous in the air and at ground level.

“They had two or three crumbing forwards who really used their pace and skill to kick or set up goals.”

Although disappointed by a third loss in a row, Newett said there were many positives in the Pioneers play.

“At times there some great passages of attacking footy from half-back and through midfield,” said Newett.

After missing the previous two matches because of injury, Heavyside bounced back to be one of the best.

“Sam is a fierce competitor, whether it be at centre bounces, stoppages, or a contest in the forward pocket.

“He played really well to kick two goals, and could have had a few more.”

Another of Bendigo’s top-age players, South Bendigo’s Liam Byrne continued his fine run to be the Pioneers best player.

After missing most of last season following hand surgery, Byrne has switched from being a half-back flanker to occassional onballer, to playing more of a permanent onball or midfield role.

Newett said a highlight for Bendigo was the goal by Kerang’s Jaden McGrath.

“It could be a contender for goal-of-the-year,” Newett said of McGrath’s snapshot from a tight angle in the pocket.

A Victoria Country representative in some of this year’s AFL national under-18 championship matches, McGrath has fought back well from injury.

“Last week (v Murray) was his first match for a few weeks, and today he played one of his best matches of the year,” Newett said.