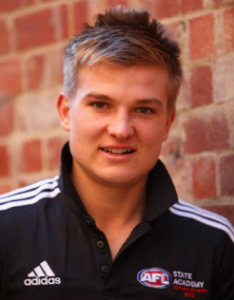 Each morning Wines wakes up at about 6.45 and by 7.30 is on the bus for a one-hour trip to Shepparton, where he's studying year 12 at Goulburn Valley Grammar School. When school's done and he has footy commitments, Wines' dad Tony, mum Jane or grandpa Leo Butler picks him up and drives him almost two hours to Bendigo Pioneers training.

At training, Wines gets ready in his corner of the changerooms, is intent on not missing a target by foot, and tries to run as hard as he can for as long as he can (GPS results suggest he is good at this). Then it's back on the road for another hour or so to return home about 9.30 at night.

"They're long days," Wines says. "On the drive I try to do some homework on the laptop. I do a lot of maths at school but it's hard to do much of that in a car bumping up and down, so I usually try to get a bit of English stuff done if I can."

As much as Wines' time management is worthy of praise - his former Pioneers and current Vic Country coach Mark Ellis says he "doesn't like wasting a minute" - recruiters are most enamoured with his football.

Wines is a strong-bodied midfielder who rips the ball out of packs, bustles through traffic and has enough time to find teammates with quick handballs or sharp right-foot kicks.

Two weeks ago in Vic Country's win over Tasmania, Wines had 31 disposals, of which 17 were contested. Last weekend, in Country's loss to Western Australia, he gathered another 24 disposals and also had seven clearances.

Wines enjoys a scrap, but there's nothing about him that's scrappy. He's classy and clean, but describes his main strength as his competitiveness. If the ball is there to be won, he wants to be the guy to do it.

"I do the in and under stuff, try to get the ball out to the runners, and try to be a big contributor," he told AFL.com.au.

He has an inkling how that streak might have developed. Wines grew up with Jack Viney, who moved to Echuca when Jack's father, former Melbourne captain Todd Viney, took on a coaching role with local side Moama.

Viney, who travelled to Europe in April with Wines as part of the AIS-AFL Academy, is a hard-nosed midfielder who will head to Melbourne as a father-son draftee at the end of the season. Wines admits they had their share of battles.

"He's one of my best mates and his competitive edge has rubbed off on me," he says, smiling.

"We've grown up fighting and throwing punches and spending time out in the bush so I think that's where part of my attitude might have come from."

Despite his travel challenges, Wines has followed a traditional path to this point: a member of state squads through school, a taste of TAC Cup footy as an under-16s player, and a general step-up in output in the last two years.

However, competing and distributing is only half of what Wines offers as a player. This season has proved him to be a more complete prospect.

Early last year, he was a stocky 'inside' midfielder at about 182cm. But in the past year he has grown around five centimetres and is now better placed doing some other things, like marking above his head, being a leading target in attack, and having more of a presence around the ground.

He's quick enough, and makes up for any lack of breakaway speed by knowing and reading the game.

"I'm starting to pick up a fair few more handball receives, so when I'm not trying to get it out I'm being involved outside and working it down," he says.

"You've got to be a three dimensional player these days. You can't just have one solid attribute. You've got to have a few parts to your game."

His fighting instincts, though, will always be the cornerstone of his game. Current Pioneers coach David Newett, who has seen Wines average 26 disposals a game in the TAC Cup this year, says he is able to work himself out of down patches.

"If he is having a quiet period, he's been able to show he can fight back into a game by doing all the grunt work around the stoppages and clearances," Newett says.

Wines' style helps drag others into games, too. Last month the Pioneers played Queensland and trailed by almost five goals at half-time. Wines, Bendigo's captain, kicked three third-quarter goals to get his side back in the game. "His teammates really follow him," says Leigh Byrne, the Pioneers' team manager.

Wines skippered Vic Country's win over Queensland, and he blossomed in elite company on the Academy trip. Even after landing late at night in London, Wines found his luggage, put it down, and then went back to help his teammates retrieve their own gear from the baggage carousel.

"He wasn't doing it to show off," says Michael Ablett, the Academy's development manager. "He was doing it just because that's how he is."

With two games of the championships left to play, and a few more after that in the TAC Cup, Wines knows his opportunity is now to impress. He's wondering and thinking about what might lay ahead, but won't be getting distracted.

"Like [Vic Country coach] Mark Ellis says, everything we do now is a job interview and we're being watched and scrutinised to the nth degree," Wines says. "There's a bit of anxiousness about what's to come but I'm excited."