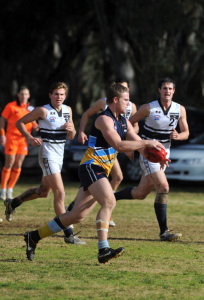 Northern led 40-25 in the fifth minute of the final quarter, but the Pioneers refused to give up.

A goal by Eaglehawk’s Jake Stringer on the run kick-started Bendigo’s brilliant fightback.

When Golden Square’s Ben Archard roved a marking contest and snapped truly the Pioneers were back within two points.

A Knights point was soon followed by Stringer winning possession from a ruck contest and snapping truly on his left to put Bendigo in front in the 19th minute.

Four minutes later and the Knights again led the contest after Nicholas Dean goaled on the run to cap a superb move in which Northern swept the ball down the scoreboard wing to the Huntly-end goal.

Wentworth’s Sam Clyne goaled on the run for Bendigo to lead by five points with just over four minutes to go.

A strong tackle by Moama’s Christian Burgess in the goalsquare earned a free for incorrect disposal and he made no mistake to seal an 10-point victory.

“We just kept taking the game on,” Newett said.

“Our plan all match was to keep on attacking, no matter what the score was.

“The conditions did not make it easy to win marking contests, so it was important to kick to space and use our pace,” Newett said.

The coach was rapt about the fightback against the Knights, who had changed dramatically since the early-season clash between the clubs.

“We knew the Knights would be much stronger this time, and the conditions meant it was going to be a much more even game,” Newett said.

Defences were well on top in a goalless first quarter.

Stringer and Golden Square’s Comanche Walls were on target in the second quarter, but the Knights held an eight-point lead at half-time.

Team-mates for Victoria Country in this year’s national under-18 titles, Wines and Stringer linked up for Bendigo’s third goal.

But it was the Knights who did most of the attacking.

Bendigo finished with a hat-trick of points to be within a goal going into what would be a memorable final quarter.

After a flurry of Knights attacks in the early minutes of the fourth term, Bendigo started to take control.

The run by Sandhurst’s Isaiah Miller and Lockington-Bamawm United’s Jesse Collins was crucial, while Stringer was pivotal in attack.

“Isaiah has had an oustanding season so far. He sets up a lot of play from half-back and is rarely beaten one-on-one,” Newett said.

“The workrate by our onballers and midfielders was excellent,” Newett said.

Kyneton’s Jordan Mangan competed well in the ruck all match.

The Pioneers were hamstrung in terms of rotations as the match went on.

Strathfieldsaye’s Vinnie Flood injured his left AC joint in the first half, and Woorinen key forward Billy McInnes sat out the second half because of illness.

The Pioneers were without Joel Donehue (ill), Galen Munari and Harry O’Meara (injured) for Saturday’s win.

After this weekend's break for development weekend, the Pioners are expected to return to Epsom-Huntly on July 28 to play Calder.