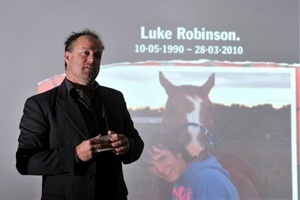 A REGIONAL man whose son died in a car crash hopes sharing his story will prompt young drivers to act responsibly behind the wheel.

The Bannockburn resident gave a presentation to the Bendigo Pioneers Football Club on Saturday and spoke about the devastation his family endured after his son’s death.

Mr Robinson told the Bendigo Advertiser he hoped his family’s story would teach people the consequences of speeding.

“Everyone thinks it will never happen to their family. We used to be in the same boat,” he said.

“Hopefully they see that we are real people and it will make them think ‘it could happen to me’.”

Officers discovered Luke had travelled at speeds up to 160km/h before his fatal crash near Geelong. His family now travels the state sharing their story and highlighting the consequences of speed.

“Speed took my son’s life,” Mr Robinson said. “If he had been doing the speed limit, he might have reacted differently...

“The main thing is you control how you drive. If you are doing the right thing, it is more than likely you will avoid crashes.”

“Our players are on the cusp of getting out there and the more we can press upon them the better,” he said.

Mr Robinson said he supported regional newspapers’ Talk the Toll Down campaign, which sought to reduce the state’s road toll through people talking about the issue.

He said parents had to show the right example to their children.

“Parents and their children need to be able to talk about speeding,” Mr Robinson said. “We don’t want people to think it can’t happen to them.”