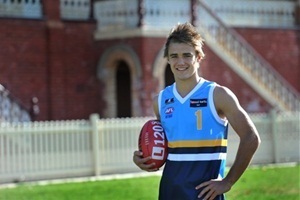 NATHAN DOLE
TEAM-MATES one Saturday, opponents the next.

That’s the scenario for Bendigo Pioneers clubmates Sam Heavyside, Sam Clyne and Christian Burgess in this Saturday’s AFL national under-18 championships clash between Victoria Country and NSW-ACT at Blacktown.

The fierce rivals do battle from 1.30pm on NSW-ACT’s turf.

The Pioneers trio will play their first matches at national under-18 level in midfield or closer to goal.

Burgess and Wentworth-based Clyne will team up in the Jason Saddington-coached NSW-ACT, while Heavyside is in the Victoria Country team, coached by former Pioneers’ mentor Mark Ellis.

“There was a carnival at Coffs Harbour in January and selectors have kept an eye on TAC Cup form and club games,” Burgess said.

NSW-ACT, which has AFL premiership players Tadgh Kennelly from Sydney Swans, and Brad Ottens from Geelong as assistant coaches, held training camp just over a fortnight ago.

“Brad Ottens is mentor for a group I am in and he’s helped me a lot,” Burgess said.

At some point, Burgess or Clyne may have Heavyside, who was last year’s Pioneers club champion, as a direct opponent.

“It’s going to be a great challenge playing against Sam,” said Burgess.

A bruised right knee forced Heavyside to be benched for the second half of the Pioneers’ match against Queensland at Collingwood on Saturday. He was treated by Pioneers’ physio Colin Faulkner last night and has another check-up today.

“I’m confident I will be right to play,” Heavyside said of taking on the Blues.

The young gun from Strathfieldsaye Storm has represented Victoria Country at under-12, 15 and 16s level and this season has struck a great balance winning in the pack or being the receiver and setting up attacks.