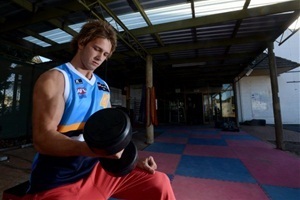 FOR the second time in as many weeks, Bendigo Pioneers wingman Nick Mee will tomorrow grace the field where Collingwood Football Legends legends such as Peter Daicos, the Coventrys, Bob Rose and many more made their mark at Victoria Park.

Mee and his Pioneers team-mates head to the Magpies’ spiritual home to take on Queensland in the TAC Cup under-18s country round.

Last Saturday, the teeanger from Mildura Imperals represented Bendigo Gold as its 23rd player in the VFL win against Collingwood.

Tomorrow’s battle with the Maroons is a crucial one as the Pioneers strive to bounce back from a hat-trick of defeats.

Mee’s pace and disposal will be keys in setting up attacks from midfield.

A second-year player in the TAC Cup, Mee put in plenty of work building up to represent the Pioneers once again.

Hours in the gym over summer have clearly paid off as he now tips the scales at 80kg, a significant jump from 72kg a year ago.

“Just from last year’s matches with the Pioneers, and senior games with Imperials, I knew I had to be stronger,” said Mee.

Extra size has helped in applying the “must dos” such as shepherds, tackles and blocks for the David Newett-coached Pioneers.

For Mee, another key factor was deciding to move south to live in Bendigo, which he did in early Janaury.

“There was a lot of time on the road last year,” he said of the trek from Mildura to play and train with the Pioneers throughout 2011.

As part of the move, Mee has taken up a personal trainer’s course at Fit Republic in Quarry Hill.

When not studying, he has put in a lot of time doing bicep curls, squats and more in weight training.

A housemate is Pioneers ruckman Zac May, from Donald. May is a second-year podiatry student at La Trobe University Bendigo.

On the footy field, Mee said he was working on trying to be more attacking from a wing or half-back.

Key off-field players in his journey to the Pioneers include his mum, Jodi in Mildura, and WA-based stepdad Adam Budzynski.

“They have given me heaps of support, as has my girlfriend, Maddie,” said Mee.

Although he was among the team’s best in the latest hit-out against Murray, Mee knows he cannot afford to relax.

“There’s pressure on every week to perform and play your role for the team.”

Mee said he had gained more confidence and learnt a lot from the hit-outs against the Bushrangers and Collingwood.

“Last week’s match was a great challenge. The intensity just went up another level and there were a lot of bigger-bodied opponents.”

The Nick Mee on-field is markedly taller and stronger than the skilful wingman who played for Sunraysia’s under-15s and later Bendigo Pioneers under-16 before kicking on to be in the TAC Cup action.