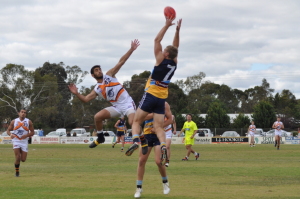 A FIRST-QUARTER ambush by the Murray Bushrangers played a big part in Saturday’s 45-point victory against Bendigo Pioneers in round seven of the TAC Cup under-18s football competition.

Murray dominated most of the opening 30 minutes at Shepparton’s Princes Park.

The Bushrangers’ dominance was not only reflected in the stats, but also the scoreboard, as they led 5.5 (35) to 0.1 (1) at quarter-time.

Bendigo lifted in the second and outscored the home team by eight points to be within four goals at the long break.

Led by the play of wingman Sandhurst’s Harrison O’Meara, South Bendigo’s Liam Byrne at half-back and Strathfieldsaye’s Vin Flood across half-forward, the Pioneers were within two goals in the third quarter before the Bushrangers fired back.

“Our intensity and workrate was nowhere near the level it had been in in the previous two rounds,” Newett said.

“The Bushrangers dominated the clearances and stoppages, especially in that first quarter.”

Newett said Murray’s pressure and tackling ferocity was among the best he had seen from a TAC Cup team this season.

“To our boys’ credit they lifted after the first quarter and worked hard to get back within a couple of goals, but Murray had the answers.”

A major difference was the impact the key forwards had on the contest.

While Porter and Warnock won or had an influence in the air, Bendigo’s attack battled for most of the match.

“We just didn’t put apply enough pressure to the opposition, which meant there a lot of passes our defenders just could not stop,” Newett said.

“We didn’t help our defence enough and were not as clean with our disposal or able to get a chain of passes going like we had been doing in other games.

“You learn from every match, and there were a few lessons handed out in this match.”

The TAC Cup competition has a break this weekend.

Bendigo tackles Queensland on May 26 from 11.30pm at Carlton’s Visy Park.