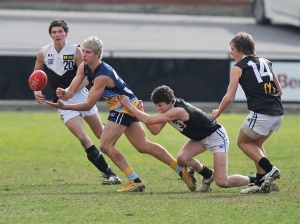 Stringer dominated many marking duels as the Pioneers celebrated a 100-point victory on the Knights’ turf at Preston.

After many months of rehabilitation and strength training, the Pioneers’ star shone in the club’s second win of the 2012 season.

Stringer and Pioneers captain, Echuca’s Oliver Wines, missed the club’s first three games of the season as both were on the AIS AFL Academy campaign across Europe.

Pioneers coach David Newett was rapt with the team’s performance.

“Jake (Stringer) was outstanding, and with Billy McInnes we had some strong focal points in attack,” Newett said.

A 10-goal haul had not been achieved by a Pioneer since Kyneton’s Steven Reaper led the club’s attack in the mid ’90s.

“The great thing about Jake’s play was his strength in marking contests, but also his leadership.

“Every player contributed, not just attacking but also defensive pressure.”

Newett said the Pioneers wasted scoring opportunities in the second quarter, but then lifted after the break to score 13 goals, while the defence, which included Isaiah Miller, Liam Byrne and Ben Lester held the Knights to three majors.

The Pioneers head to Moama this Saturday to take on the formidable Calder Cannons.

Echuca-based players such as Wines and the pacy and hard-running Burgess, who kicked three goals against Northern, will be determined to play key roles as the Bendigo Pioneers chase their third victory of the season.