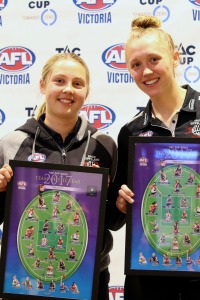 It caps off an outstanding year for both Guttridge and Hanks that has been full of accolades.

In 2017 the advent of the AFLW had a flow on effect on the elite talent pathways. The TAC Cup Girls competition was born, with all 12 TAC Cup regions fielding a girls’ team to play in a five-game season across March and April.

Guttridge and Hanks excellent form in this competition saw them selected in the Vic Country AFL Under 18 Girls squad that played in the National Championships in July.

Vic Country went through the National Championships undefeated, including a 27-point win against traditional rival Vic Metro. Hanks was named Vic Country’s Most Valuable Player, an outstanding achievement given that she is a bottom aged player.

From the National Championships both girls were selected to play in a combined Victorian Under 18 squad that played against the Under 18 Allies in a curtain raiser to the recent AFL Women’s State of Origin match.

Both Guttridge and Hanks were then selected in the AFL Women’s Under 18 All Australian Team, with Guttridge named as captain.

Top aged Guttridge has combined all of this with playing for Cranboune in the VFL Women’s competition and was a member of the AFLW Academy. She will now prepare for the AFLW Draft Combine to be held in October prior to the AFLW Draft.

Hanks will play another TAC Cup Girls season with Power and will be eligible for the 2018 AFLW Draft.