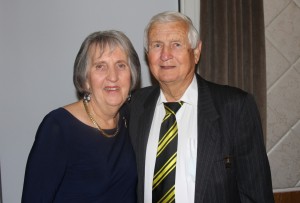 The Mayne Community acknowledged Rod and Glenda Barber for their loyal and continuous service to the Tigers last night at the Annual Club Champion Presentation Night at Cloudland.

In emotional scenes and with a standing ovation, Rod Barber firstly received recognition for his 70 Years continuous service for the Mayne Tigers. The popular Mayne cult figure was humbled by the Award never being one to seek any special recognition. Rod has been a player at junior and senior level, a capable administrator, fundraiser and willing workhorse for the club over this extraordinary time period. He is also a Life Member of the Senior and Junior club.

The Inaugural Women’s team culminated their year in grand style with the awarding of the first Glenda Barber Best and Fairest Trophy. Glenda was incredibly honoured to have the award named after her giving a moving speech recognising her family connection to the Tigers dating back to the first team in 1924 and the first Premiership in 1927 where her father Vince and Uncle Clem Ryan were prominent members.

Rod and Glenda have been synonomous with the Mayne Tigers for everyone that has been associated with the club in living memory and the current crop of Tigers, male and now female are well versed in their contributions to the club's history and also the joy it is to have them still involved.