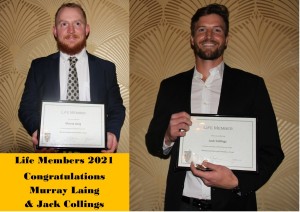 Life Membership was awarded to two young club members for their ten years of service at the Mayne Tigers Annual Presentation Night at Cloudland last night.

Club President Russell Ditchburn commented “Both of these young men have been extraordinary contributors to the Mayne Tigers as players and volunteers across many facets of the club. Each have made a significant impact on the club over an extended period as club leaders so it is so exciting to see the club’s future in such good hands.”

Murray Laing was made a Life Member for his service as follows;

Jack Collings was awarded Life Membership for his service as follows;